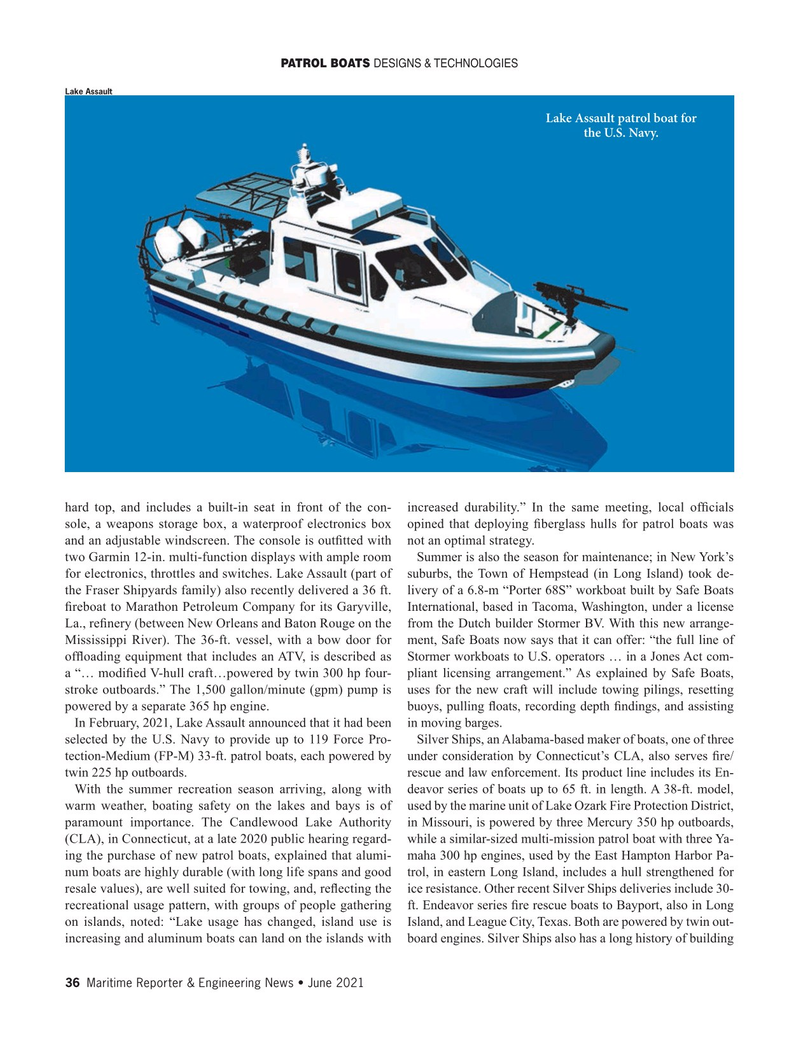 Lake Assault patrol boat for the U.S. Navy. hard top, and includes a built-in seat in front of the con- increased durability.” In the same meeting, local of? cials sole, a weapons storage box, a waterproof electronics box opined that deploying ? berglass hulls for patrol boats was and an adjustable windscreen. The console is out? tted with not an optimal strategy. two Garmin 12-in. multi-function displays with ample room Summer is also the season for maintenance; in New York’s for electronics, throttles and switches. Lake Assault (part of suburbs, the Town of Hempstead (in Long Island) took de- the Fraser Shipyards family) also recently delivered a 36 ft. livery of a 6.8-m “Porter 68S” workboat built by Safe Boats ? reboat to Marathon Petroleum Company for its Garyville, International, based in Tacoma, Washington, under a license

La., re? nery (between New Orleans and Baton Rouge on the from the Dutch builder Stormer BV. With this new arrange-

Mississippi River). The 36-ft. vessel, with a bow door for ment, Safe Boats now says that it can offer: “the full line of of? oading equipment that includes an ATV, is described as Stormer workboats to U.S. operators … in a Jones Act com- a “… modi? ed V-hull craft…powered by twin 300 hp four- pliant licensing arrangement.” As explained by Safe Boats, stroke outboards.” The 1,500 gallon/minute (gpm) pump is uses for the new craft will include towing pilings, resetting powered by a separate 365 hp engine. buoys, pulling ? oats, recording depth ? ndings, and assisting

In February, 2021, Lake Assault announced that it had been in moving barges.

selected by the U.S. Navy to provide up to 119 Force Pro- Silver Ships, an Alabama-based maker of boats, one of three tection-Medium (FP-M) 33-ft. patrol boats, each powered by under consideration by Connecticut’s CLA, also serves ? re/ twin 225 hp outboards. rescue and law enforcement. Its product line includes its En-

With the summer recreation season arriving, along with deavor series of boats up to 65 ft. in length. A 38-ft. model, warm weather, boating safety on the lakes and bays is of used by the marine unit of Lake Ozark Fire Protection District, paramount importance. The Candlewood Lake Authority in Missouri, is powered by three Mercury 350 hp outboards, (CLA), in Connecticut, at a late 2020 public hearing regard- while a similar-sized multi-mission patrol boat with three Ya- ing the purchase of new patrol boats, explained that alumi- maha 300 hp engines, used by the East Hampton Harbor Pa- num boats are highly durable (with long life spans and good trol, in eastern Long Island, includes a hull strengthened for resale values), are well suited for towing, and, re? ecting the ice resistance. Other recent Silver Ships deliveries include 30- recreational usage pattern, with groups of people gathering ft. Endeavor series ? re rescue boats to Bayport, also in Long on islands, noted: “Lake usage has changed, island use is Island, and League City, Texas. Both are powered by twin out- increasing and aluminum boats can land on the islands with board engines. Silver Ships also has a long history of building 36 Maritime Reporter & Engineering News • June 2021